Begin! the immortal journey where the only limit to life is imagination.

You are not connected. Please login or register 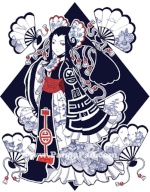 Looks:She looks like her mother a lot more than Brandon does but she got his ears, nose, and lips. Two long black brown hair in pigtails with light honey eyes. She usually wears summer dresses of little pants and flower shirts so you could say she's more girly in the family than most of her sisters. She has a black swirl like tattoo going down from the shoulder to the wrist that it spreads out onto her hand.

Personality: Susie is the sweet, fun loving, and playful type young girl in the family that she tries to spend more time with Melli and more with Brandon. Is very silly to make everyone laugh and have a good time even if the bad days come. Extremely shy around boys near her age but usually asks her dad to help her understand things like this. She's very open with her self, daring to try new things just like her bigger sisters, well-bred, and elegant just like a young lady.

At times she tends to be dreamy with her thoughts that others can't understand her at times. High spirited that it's higher than her father's own. Has a soft side that is easy to but has a tough side that has her being very scary. She can become short tempered just like her mother but the same as her father. Very crude, dirty playing if others were being mean towards her. Susie hates disloyalty from anyone she knows, fixed on things others try to show her and frightening.

Ice manipulation: Controlling and using ice for her aid but at times things tend to become too powerful for her so Brandon's training her.

Blood fire: Uses her own blood that catches on fire. This can become deadly when it touches your skin or anywhere that's able to burn. She taught this to herself but not many know about it.

Bat summoning: Having a wave or flock of bats show up to aid her as well but they stay around her since she sees them as her babies. These bats are also able to use fire just like her.

Hypnosis: Tricking another ones mind to do whatever she wants but also make them do other things that's needed for her.

Fire: Her fire is a dark orange unlike her siblings who know it. These flames can become extra hot and change shape of any animal she wants.

Demonic magic circles: Can use demon magic but her father told her about it but is teaching her slowly. This magic was something passed down towards her but she practices it from time to time.

Ghoul transformation: She doesn't have the same changes on either legs or arms but it's just her eyes. They change into a dark glowing orange but veins are seen in the white area of the eye that they become dark too. With the eyes, she can make ghoul monster eyes that has wings. They help her see, attack, or absorb any energy near by. They can even change into snake like monsters that's more dangerous than the first form.

Weakness: very strong odors mess up her sense of smell, Her ears are very sensitive to some sounds that they bleed. Transformations tend to take a toll on her body that she becomes sick for a couple days. motion sickness when riding a train.

Bio history: She was a creation by Brandon who was made as a accident. At the time she reformed as a ghoul but she was formed as a little girl. Brandon didn't know what she might do to him or Melli when seeing her sit there crying. However she just wanted a family even if she was just a creation. After a while, Susie was accepted into the family to be loved and accepted by everyone.
_________________
~Seeing my own garden blooming to show the roses and flowers that show their colors. Some are big, some are small but it's just a precious from each little petal.~
Current date/time is Tue Feb 18, 2020 1:30 am